Every March, like the migration of strange Monarch butterflies, artists, galleries, collectors, critics and curators from across the globe make New York their destination during Armory Arts Week. From March 7-10, 2013, stationed at the Chelsea Piers 92 & 94 overlooking the Hudson, a hangar’s worth of creativity bustles in the largest NYC art fair. The fair has changed locations since its inaugural 1913 debut – from the East Side to Chicago to the Cincinnati Art Museum to Amherst College – ultimately that its coming back to its roots. The piers at the Armory Show, now designated as Contemporary and Modern, are devoted to showcasing the most important, notorious, and emerging artworks of the 20th and 21st centuries.

My friends Max and Erica enjoy a Pain au chocolat, muffin, Diet Coke and Coffee in the VIP Lounge fitted by Roche Bobois. 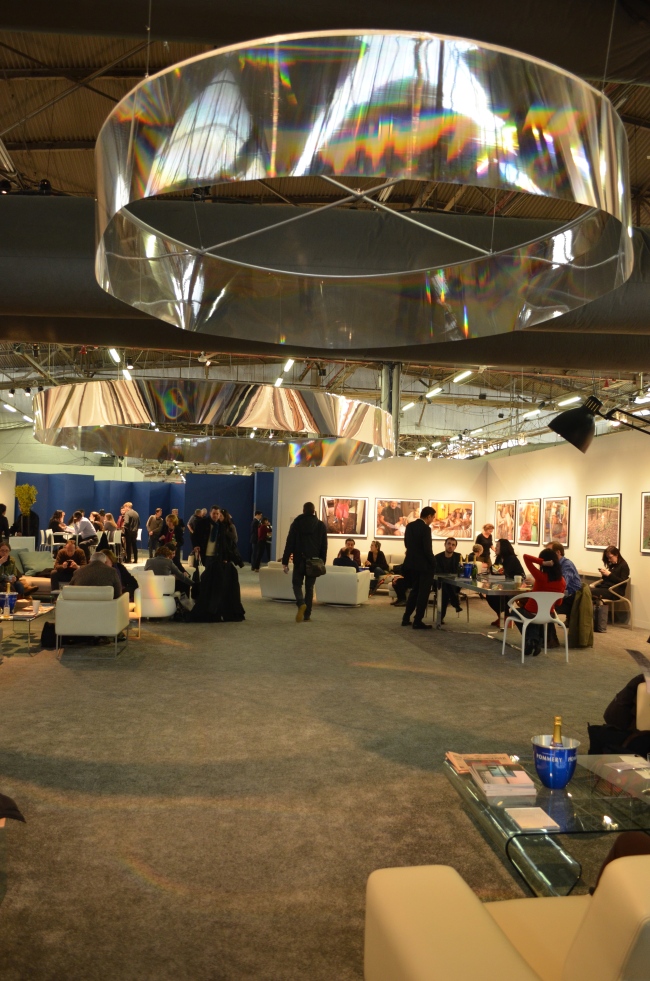 The Hudson River on the West Side of the island was once central to to the city’s trade and transportation infrastructure. With the success of the auto industry, American’s reliance on waterways diminished and all-but-halted. Businesses at the piers closed down and many structures were left to decay. The desolate, vacuous spaces could be dangerous territory but also offered temporary homes to various artist projects, the most illustrious, perhaps, being Gordon Matta-Clark’s iconic Day’s End on Pier 52 in 1974. 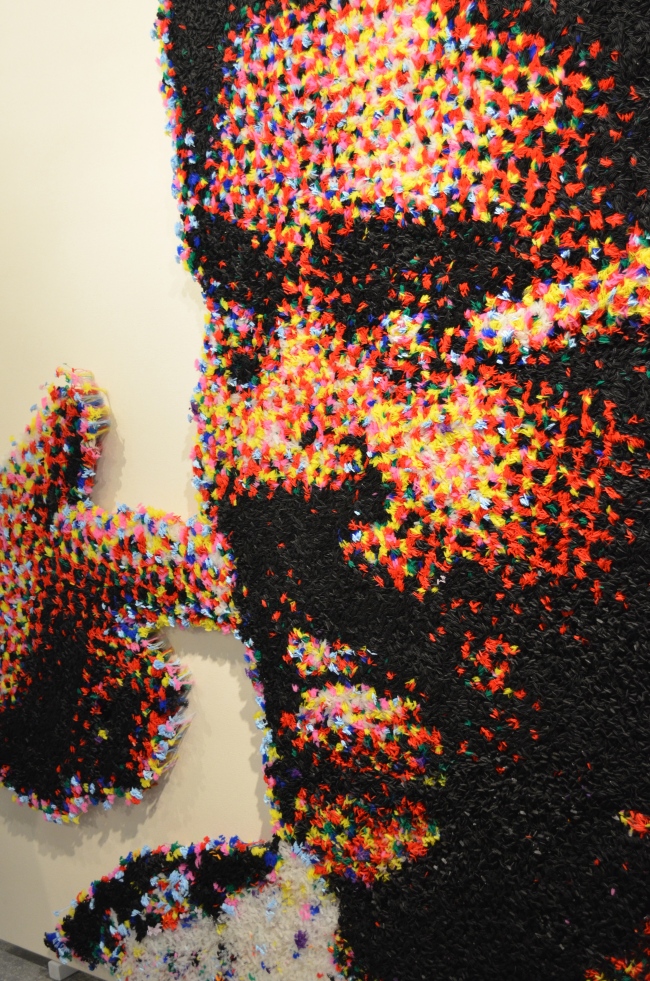 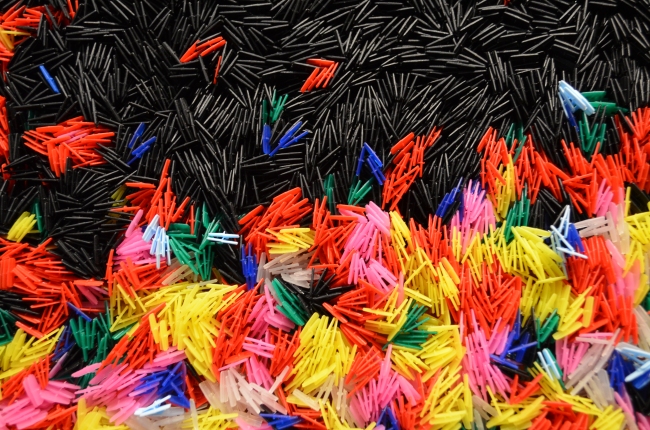 Samsøn Projects of Boston had a booth arrayed with bongs, Carl Sagan and retail price tag fastener, featuring the works of Todd Pavlisko. 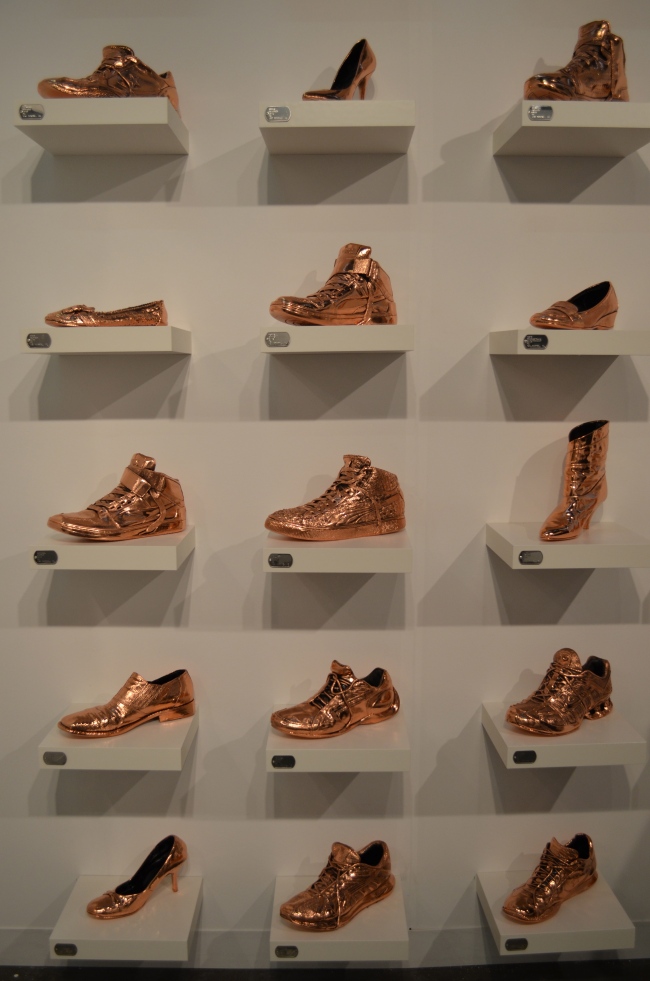 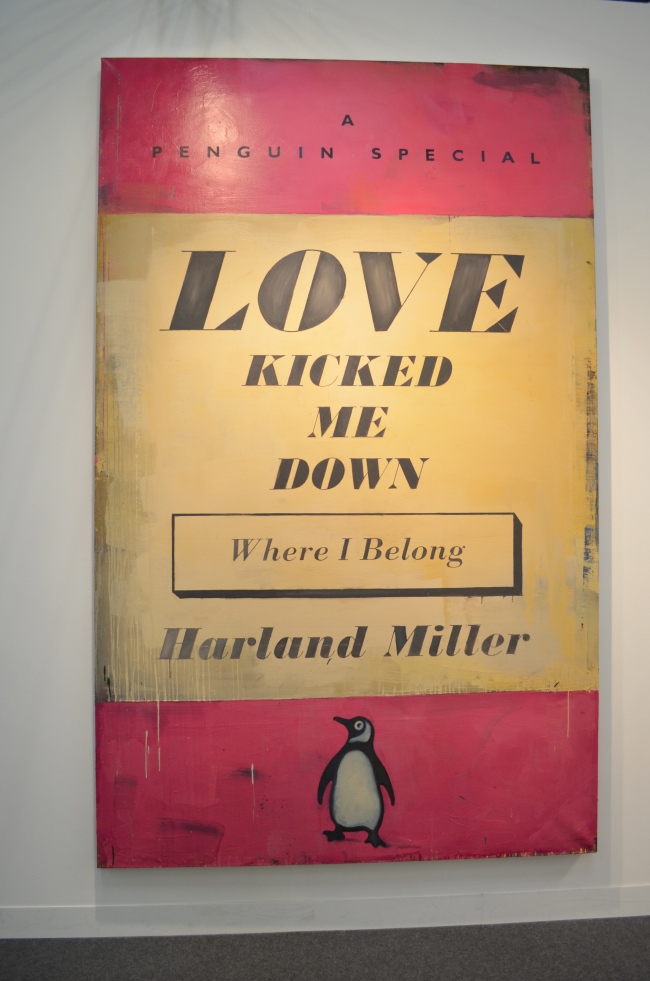 Destined to be a new Penguin Classic: Love Kicked Me Down (Where I Belong) by Harland Miller. 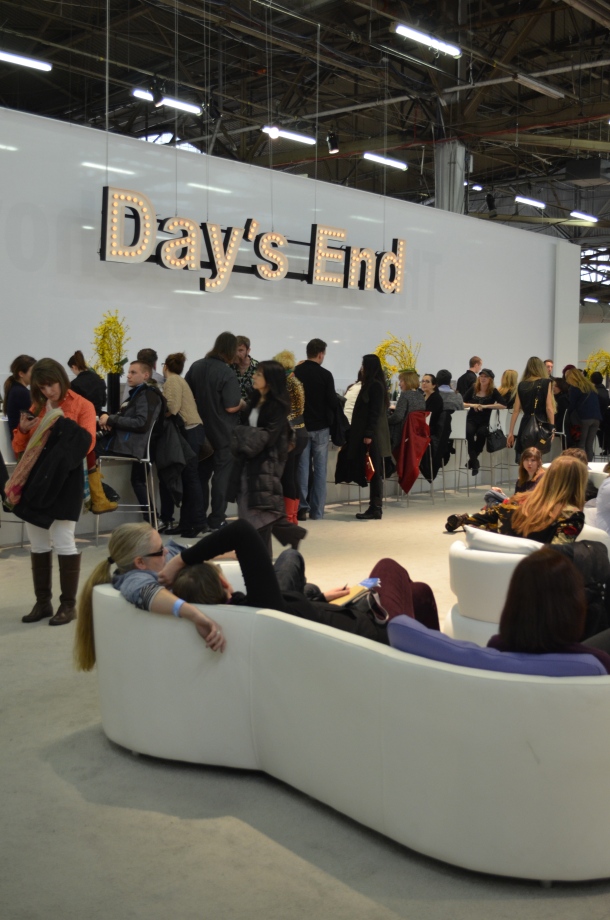 The “Day’s End” Champagne Bar at the Armory Show Contemporary section. Little did you know that this Pommery Champagne bar is steeped in art history. The special light-bulb sculpture Day’s End, 2013, is site-specific installation by Peter Liversidge that references an eponymous work by Gordon Matta-Clarke on pier 52 from 1974-75; and Marcel Duchamp & Ulf Linde – Posterity Will Have a Word to Say, a special tribute to the 100th anniversary of the 1913 Armory Show, curated by Jan Åman. Drink up. 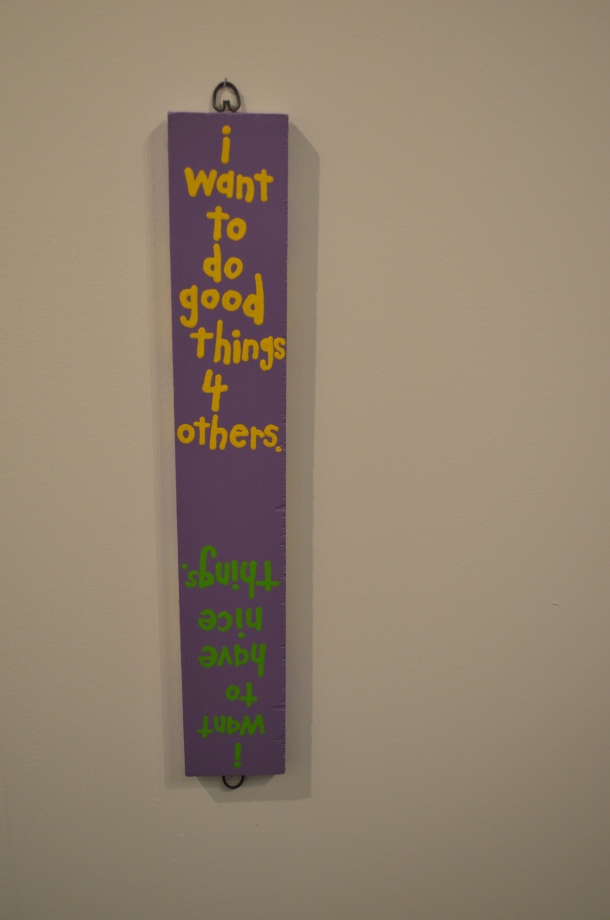 Cary Leibowitz’s  installation from Invisible Exports was a little too on-the-nose with its pessimistic yet honest take on pie charts, cliches and children’s rhymes.

Brian Calvin, Can With A Landscape (Robin), 2009.  The otherworldly, martian quality of the artist’s portraits is ominous. Alex Katz’s influence on Calvin seems obviously delightful.

END_OF_DOCUMENT_TOKEN_TO_BE_REPLACED

I spend a lot of time preparing. I think a lot about what I want to do. I have prep books, little notebooks in which I write everything down before a sitting. Otherwise I would forget my ideas. – Helmut Newton

Room: Botanical illustrations made from reproductions circa the 1700’s on the wallpaper at the Carolus Linnaeus Swedish estate.  The spectacularly beautiful Swedish countryside, characterized by sweeping coastline, sheltering forest, and historic townships, is the setting for the equally spectacular tradition of residences, Swedish residences. Photographs by Ingalill Snitt via The Swedish House. / Notebook: The Medium Strawberry Thief fabric notebook from the Liberty London collection features a print fabric cover, yellow elastic fastening and ruled ivory pages with Liberty logo footers via Liberty London. Room: A splash of Scandinavian decor under the eaves proves to be a zen space for a study. A book’s spine provides pops of color, the file cabinet keeps the space bright, and the stool can fit an unexpected friend. Clean, simple and modern. Photography by Espen Grønli via Design Milk. / Notebook: The paper nuts at Postalco produce a rainbow of nifty notebooks! Based in Japan but hailing from Brooklyn, the stationery experts provide unlimited ways to tote your notes and store your sketches! Made with A7 metal springs, graph paper and a printed cover. Note that all pads are assorted, at random, and specific colorways cannot be chosen via Opening Ceremony.

So much is kept in a little notebook…

My fiancé and I live in Chelsea, known to many as the art gallery epicenter of New York City. Peppering the sidewalks like haphazard splashes of paint on a Pollock canvas, there are almost 350 concurrent exhibitions at any given time. Some Saturdays, with no plan in mind, we meander the avenues neighboring the Hudson River and walk from 20th street until 25th. One such day in February, 2012 we stumbled upon Petzel Gallery.

Anarchy, animation, trash, charcoal, linen and the world of a deranged evil villain collide in the gallery.

Batman Returns, the show by artist Joyce Pensato ran from January 12 – February 25, 2012. Pensato, is an artist born, raised and currently working in Brooklyn. Her proximity to Gotham is not lost on me. “Batman” is a motif that first appeared in Pensato’s drawings as early as the mid-1970’s. “I was resisting working with the traditional still life — apples and pears and all that crap,” she says. Something clicked when she first sketched the caped crusader. “I just fell in love with Batman. I think it was the ears.