Let’s get technical (sung to Olivia Newton John’s “Let’s Get Physical”) White is a color, although it is also an optical illusion. The color white is merely a perception which is evoked by light (the color white does not exist without light) that stimulates all three types of color sensitive cells in the human eye. These cells are actually all stimulated in nearly equal amount and with high brightness compared to the surroundings in order to produce the color white.  An object whose surface reflects back most of the light it receives (opaque) and does not alter its color will appear white. Most sources of light and incandescence also appear white. The etymology of the word “white” in most languages usually also means “bright”, “reflected”, and “light”. Clearly ancient civilizations understood the concept that the color white was similar to lightwaves way before science caught up.

Rather than delve into the man-made connotations of the color (purity, chastity, holiness, weddings, mournings, et. al.), I think of white merely as an extension of the sun and life, and the light provided by stars. This is its natural state, devoid of context.

Image and furniture via Ikea. White furniture in a white living room can create an illusion of space.

Both of the above images are from the same home. And, technically speaking, if you were to view these white spaces against a dark backdrop, the brightness would be even more obvious!  White allows deeper hued objects (such as vases, books, and flowers) to pop at full potential. The contrast between the white and the tchotchkes allows each object to be put on a pedestal. It also allows each object to seem purposely chosen.  Image found HERE.

White does not have to be minimal! Stick to a color palette of three (burgundy, brown, and white) for a lush and deep feeling. Photo by Art Gray, New York Loft styled by White Webb. 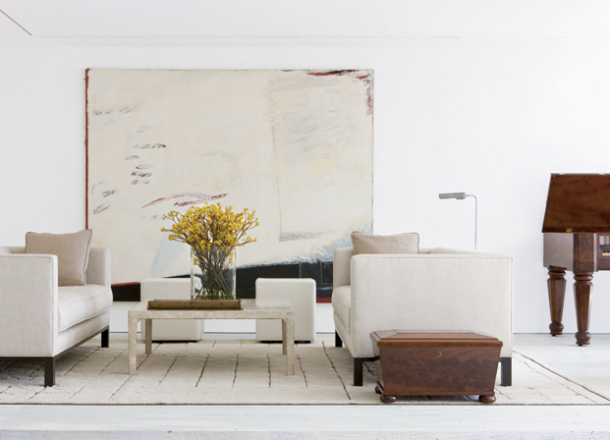 A shabby chic inspired white room replete with reclaimed barn wood floors. Also, the varying materials in this room force the eye to look at all objects and all dimensions. Designer Darryl Carter transformed this blank space. Benjamin Moore’s “Simply White” is used throughout the apartment but to add the illusion of airiness, openness, and area. Image photographed by Gordon Beall and found HERE.

Amaridian, has teamed up with Cape Town’s Design Africa to showcase and promote excellence in African design. The images is from the showcase of African design in NYC, products by Mud Studio, Ronel Jordaan, Tekura Design and Diallo Design. White does not need to have stark geometric shapes, and uber clean lines. Here the color white is romantic, trivial, and subdued. Image found HERE.

Did I mention how important windows (and thus light) is for white? The above loft has a very 1970’s design aesthetic! Image found HERE. 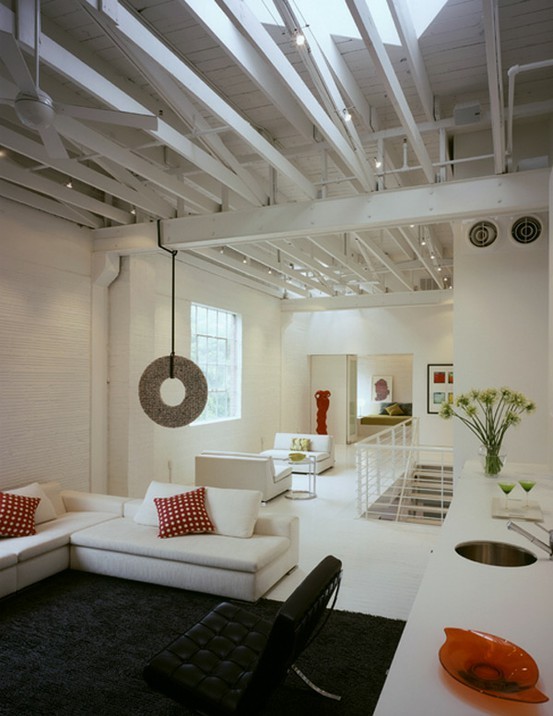 Ebony and Ivory! Black, Red, and White is a classic color scheme that is never wrong. Image found HERE.

I could actually see enjoying laundering in this space. I have never felt invited in by a laundry room, but here’s to firsts! I bet spotting stains in this environment is super easy. I also love the light, pine wood accents. Image found HERE. 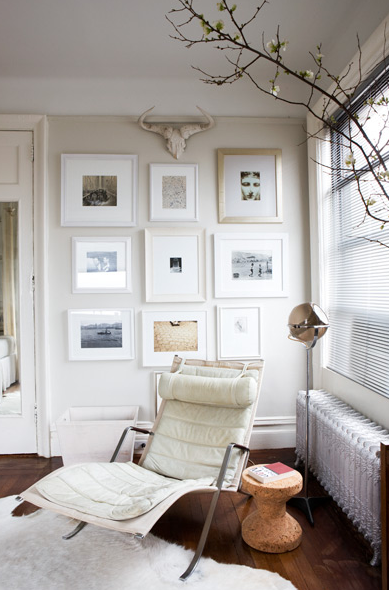 HOW CAN I LIVE IN A WHITE WASHED DREAM CLOUD?

Tucked within the patchwork of cobblestone streets in the West Village neighborhood of New York City lies The Meadow. The store is the self touted ultimate source for gourmet salt, rimming salt, curing salt, finishing salt, sea salt, and artisan salts from around the world. The shop also carries chocolates, bitters, and fresh flowers. In short, it is a savory haven filled to the brim with saliva-producing tastes and smells. The space is postage-stamp sized, highly personal, and quaint. In the summer the shop even offers homemade ice cream sandwiches topped with sea salts and chilis! ARTISANAL! YES. Get thee to The Meadow for a dose of inspiration, stat. 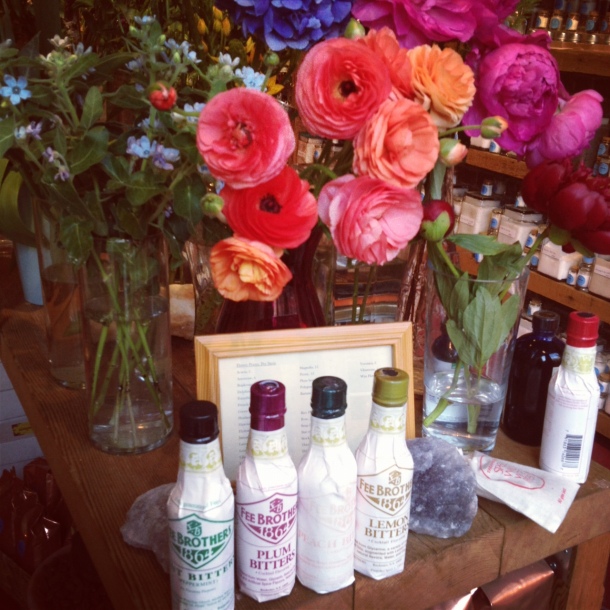 If you have not heard about it, or usually do not partake in the world of nonfiction history through food (Cod, Splendid Exchange, The Big Oyster, et. al.), I highly suggest you pick up (and subsequently read) Salt. This mineral has a long and trying tale – a substance so valuable it served as currency, salt has influenced the establishment of trade routes and cities, provoked and financed wars, secured empires, and inspired revolutions.  Next time you reach your hand across the dining room table or spin the lazy-susan, think about the surprising importance of this commodity. In the end, we’re talking about an EDIBLE ROCK. 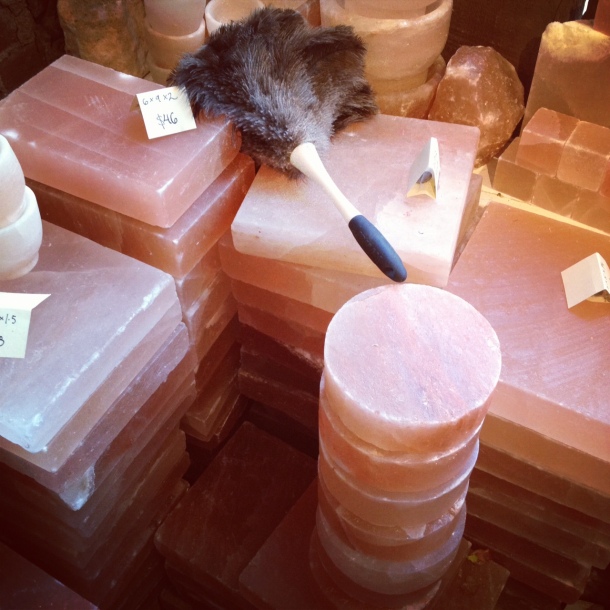 The store not only smells fantastic (and I really do have a visceral reaction to how well planned and tactile it all is), it is also designed to fully appreciate the arts. This is my cathedral of gustatory meets visual – where lush flowers intermingle with charcoal smoked salts, where finely framed gouaches match the colors of paper-covered bottles of bitters. Sensual – to the truest sense of the term.

Mark Bitterman, one of the founders of this shop and second half of the married duo, also wrote a book extolling the wonders of salt. It seems it is easy to write a book about an item that is older than civilization itself! Salted: A Manifesto on the World’s Most Essential Mineral with Recipes should probably line the wall’s of every kitchen’s cookbook shelf. “From the elegant fleur de sel and flake salts to 500 million year old Himalayan salt slabs that resemble pink quartz, Bitterman explains the history and science of salt production. The book profiles over 150 salts, and includes 50 recipes that showcase this versatile and marvelous ingredient.” If your kitchen scares you, or if like I used to, you live in a 500 sq. foot apartment wherein your kitchen touches your bathroom which touches your bed – buy this book just for its glorious photos. 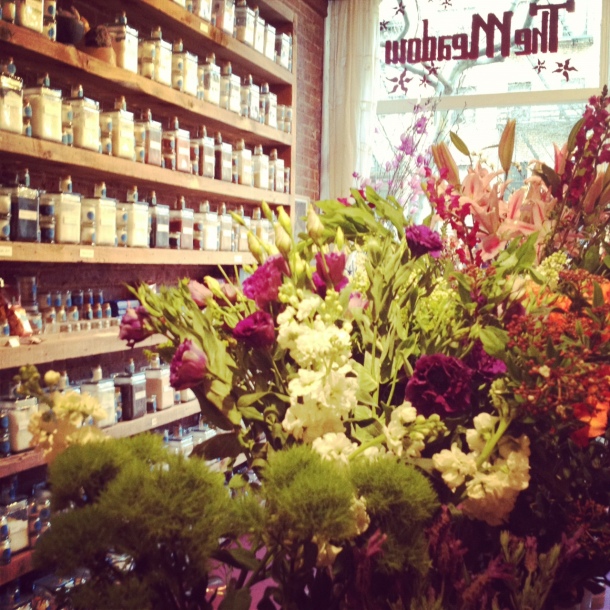 As always, my favorite storefronts are directly inspired by the visual arts, “Before founding The Meadow, Jennifer Turner Bitterman (other half of the duo) worked as an art historian at The Metropolitan Museum and The Frick Collection in New York, The Getty Museum in Los Angeles, and the Musee du Chateau de Versailles in Paris. Jennifer’s passion for cooking, eating, and reading and writing poetry have guided her travels and inspired her belief in running a business that above all honors the intimate connections between producers, merchants, and customers.”

Would it be too weird to begin using these salt blocks as legs for tables? Or as bookends? Salt should be the next frontier in interior design. 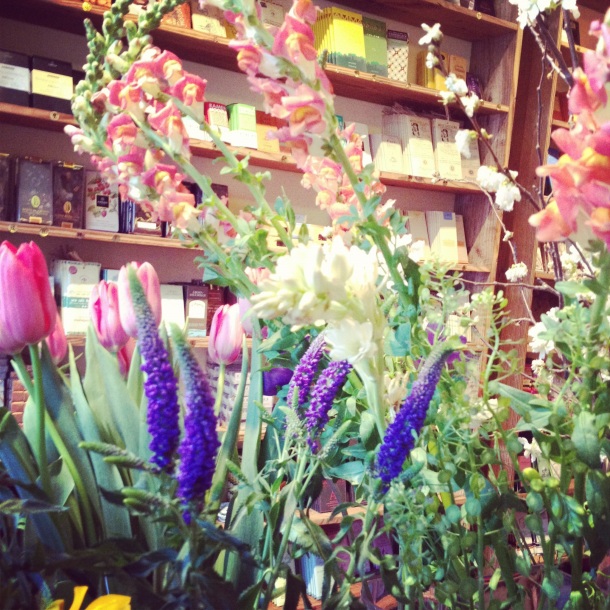 Your eyes doth deceive you!  Michel Cluizel Milk Chocolate Sardines – 5 pc Tin – Sardines En Chocolat Au Lait – Fine chocolate doesn’t have to be serious. These five milk chocolate sardines from Michel Cluizel are still made of the highest quality ingredients, but with an added element of fun. 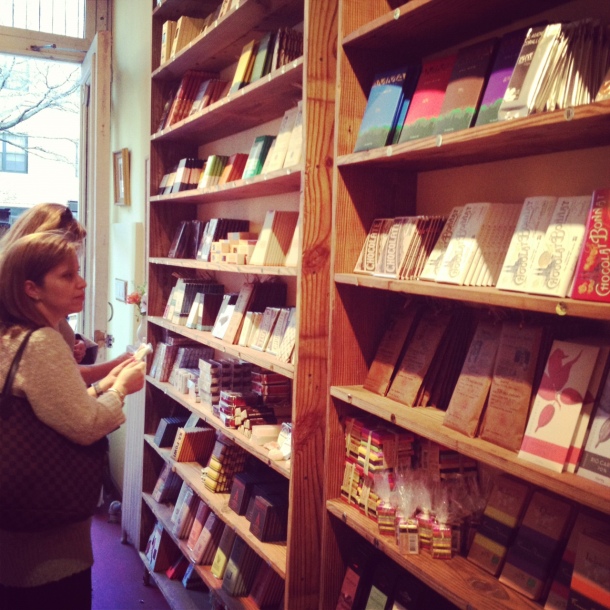 I have actually had dreams that feature a wall of chocolate like this.

To show you that I am not crazy and that salt CAN actually be used as design inspiration, check out these Epsom Salt Luminaries, above. Photo and a how-to from Crafts by Amanda, HERE.

The shop’s name was chosen because Jennifer wanted to create a place that felt like coming home, where personal connections and sensual pleasures welcome you. I suggest you visit and spend time amidst beautiful fresh cut flowers, taste strange and enticing foods, and explore the astonishing depth of the elemental ingredients.

And now, for a pun, you’ve officially been A-SALT-ED (assaulted? get it? ….crickets).

P.S. All photos taken by me unless otherwise noted.

I think animal prints have had a bad rap lately. What with all this “Jersey Shore” and “Jerseylicious” nonsense, the leopard skin, the giraffe pattern, and the zebra print has been given an unfair toss into the “trashy” and “kitschy” world. I actually believe animal print (faux, screen printed) can be extremely minimalistic and classy. Thus begins my campaign to reclaim animals! For Example:

This basically makes me want to play and watch Jumanji. By Horchow. 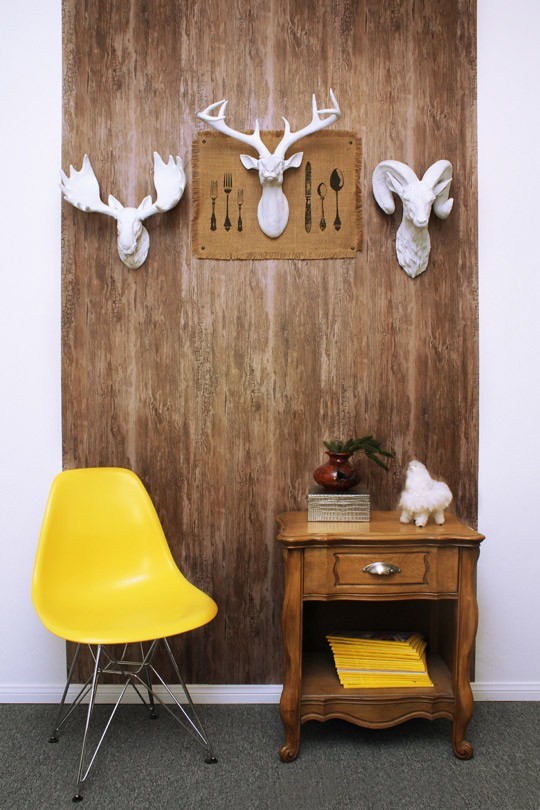 No animals were harmed in the making of that Elephant Bust. Via Anthropologie.

Can you believe this beauty was found in an only 450 square foot home? Here.

When in doubt, wrap an antler in colored and neon yarn! Insta-cool.

I cannot imagine any chair being more comfortable than this Sheepskin Fluffiness. Here.

Both images above via Desire to Inspire. Please note the Giraffe prints, the floral armchair, the owls, the horses (WE’RE IN A JUNGLE HERE PEOPLE).

“I believe there is no sickness of the heart too great it cannot be cured by a dose of Africa. Families must go there to learn why they belong together on this earth, adolescents to discover humility, lovers to plumb old but untried wells of passion, honeymooners to seal marriages with a shared sense of bafflement, those shopworn with life to find a tonic for futility, the aged to recognize a symmetry to twilight. I know this all sounds a bit much, but if I have ever seen magic, it has been in Africa.” – John Hemingway, African Journeys