My mother, queen of all things craft, used to knot and braid macramé often in the late 1960’s and early 1970’s. I recently asked her to reteach me the craft, and although she remembered perfectly how to hem and crochet, she completely forgot the knotting techniques. She had not touched the hempen rope since the Carter Administration. It seems macramé is much harder than remembering to ride a bicycle.

Gracie, a graphic design student aspiring to be a print and pattern designer, makes some of the most beautiful knotted bracelets I have ever seen. Many more HERE.

This art is simply a form of knot tying. However, there are specific tying patterns and weaving lingo used: hitching, double hitching, half hitch, granny knots.  The knots were long crafted by sailors, especially in elaborate or ornamental knotting forms, to decorate anything from knife handles and plant vases, to bottles to parts of ships. The word “macrame” is Arabic for “fringe,” named after the thirteenth century rug weavers who finished the edges of the loomed material (think rugs) with decorative knots. Based on Arabic conquests, and trade routes, the craft spread globally. Sailors, along routes and while bored, made macramé objects in off hours at sea, and sold or bartered them when they  were at port. Favorite creations were usually hammocks and bell fringes. These were sold in China however, did not catch on as the people already had Chinese Square Knotting. 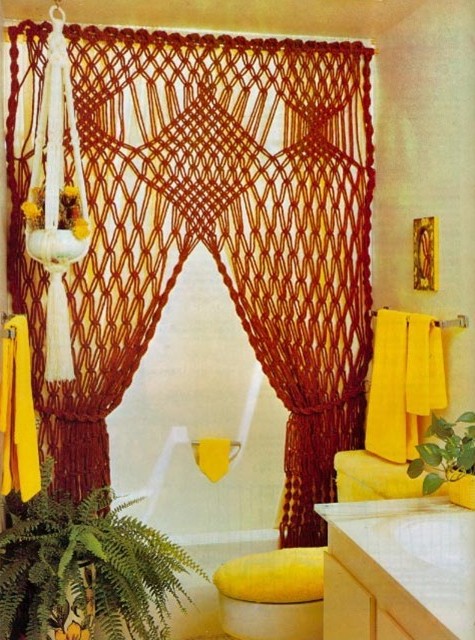 Sarah Parkes is a designer who works with macrame under her label Smalltown. Above is a residential commission, The Griffin Residence, with a custom chandelier by Parkes. For the product line, go here.

Knotted objects eventually reached the English courts by the 17th century, but did not become de rigueur in the mainstream until the late 1700’s and 1800’s. Sylvia’s Book of Macramé Lace (1882), a  bestseller for the era, showed readers how “to work rich trimmings for black and coloured costumes, both for home wear, garden parties, seaside ramblings, and balls—fairylike adornments for household and underlinens …” Most Victorian homes were outfitted by these intricately tied knots.  Apparently, hippies, children, and other “free love afficianados” saw something utilitarian and inspiring in the knotting. The craft had a huge resurgence in the 1970’s as a means to make wall hangings, articles of clothing, bedspreads, capes, ponchos, shorts, tablecloths, draperies, plant hangers, and other furnishings. Now, every child sent to summer camp knows how to macrame thanks to friendship bracelets (often worn stacked up an entire arm). Sometimes going to overnight camp feels like living in the 18th century meets the 1970’s, so this revitalization makes sense. 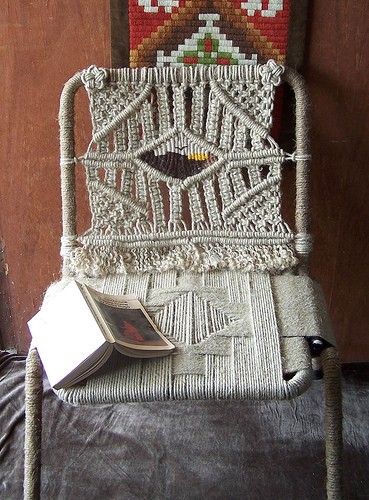 Be sure that you are ok with feather dusting and steaming! Once a summer camp standby, macramé might be the next big thing found HERE.  Hanging in the lobby of the new Ace Hotel in Palm Springs, L.A. artist and designer Michael Schmidt wanted to shake things up. “I suggested we take the seventies macramé idea further by incorporating nautical and Japanese rope-knotting techniques,” he says. The curtain hangs from assorted pieces of antique hardware, ship’s pulleys and butcher’s hooks. 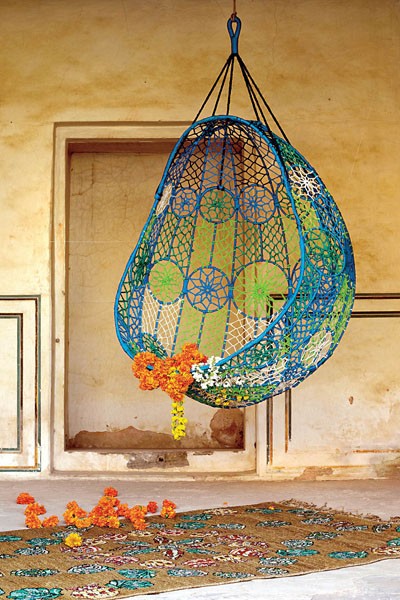 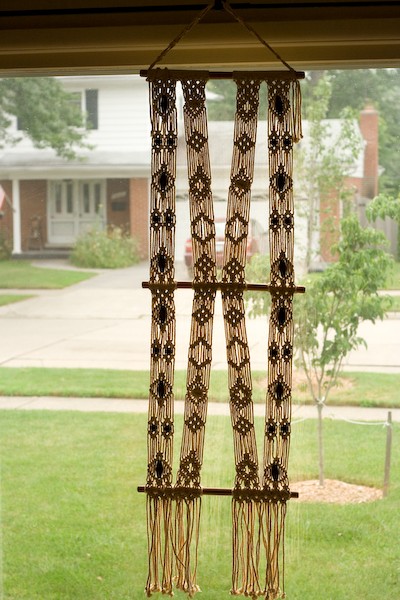 Fun and slightly kitschy 1970’s macramé window hangers are just lovely. With circular and triangular patterns, this is sure to allow unique light patterns to brighten up your day.  Made with wood and cotton, the large macramé can go in a window, a door or a wall to give personality. Image found HERE.

A wall hanging on view at Relish in Portland by artist Sally England of Mondo Macrame Product. I just love the fact that back in the day the knotting craze was not just for women, but that men, young boys and girls, teenagers, and the elderly were doing it too,” says England. “People were using their hands to make everything from rad macramé vests and belts, to whole macramé rooms and hanging pods.”

More organic, eco, and soft Sally England modern macrame, HERE.  So how to use these hangings in a home? “Knotted rope can add some really interesting texture to a space, especially on a large scale,” says England. “Because I generally work with looser knot structures, my room dividers would be great in an open loft-like environment where flow and delineation of space is needed but complete separation is not.” 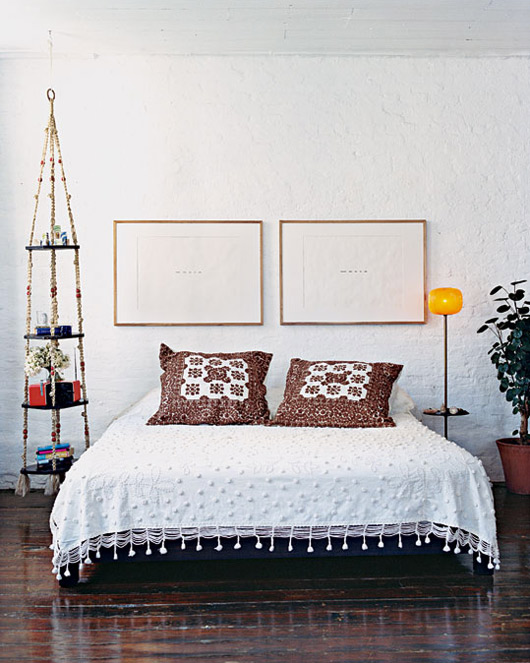 Ms. Robert’s loft, which is located in an old soap and wax factory in the west village, is a study in less is more and found via SF Girl By Bay. 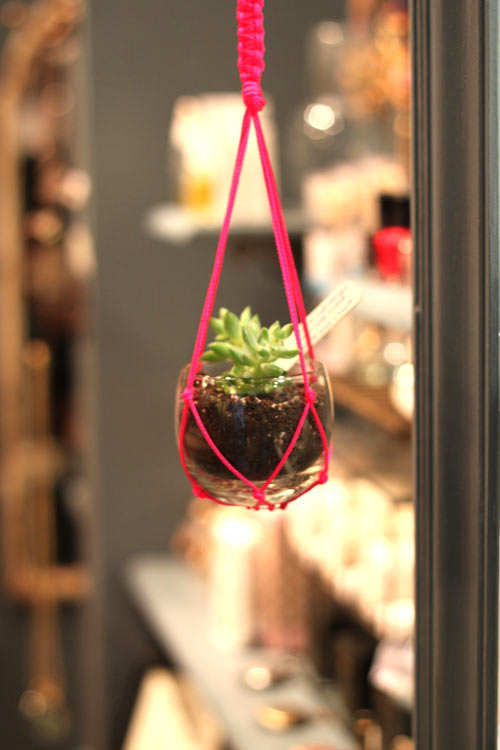 The Williamsburg jewelry and quirk objects store Catbird carries this little neon macramé planter. I am all for this roping technique in small doses with clever colors! The planters are made by Brooklyn artist Melanie Jelacic. Image found, HERE.

A wall hanging made using second hand fabric and scarves, via Stampel.

A WHAT-NOT-TO-DO with macrame (for immediate reference): 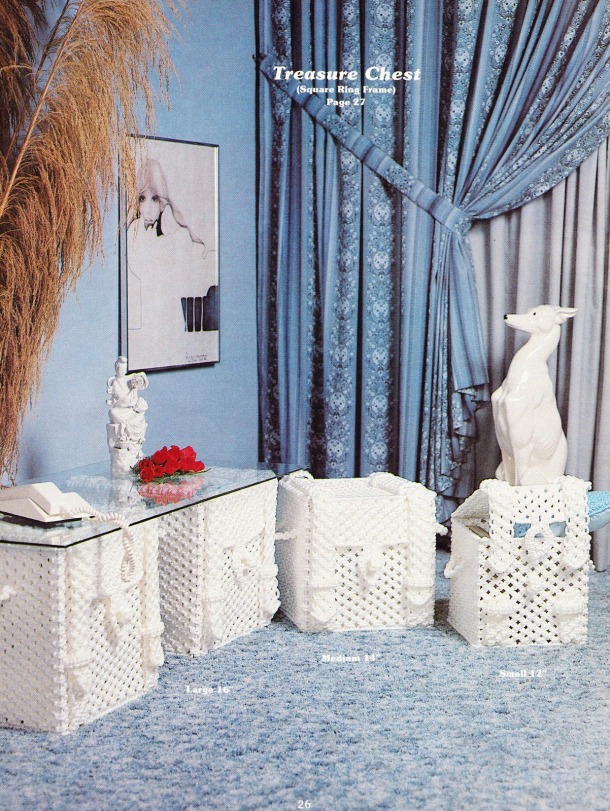 My name is Keren. I was once a pigeon in Paris, pecking at street cheese, and dreaming of anthropomorphism.
View all posts by Keren »
← Trunk Show
Mixology (2) →